The Infinite Weirdness of Everything Everywhere All at Once

DISCLAIMER: SPOILER ALERT FOR EVERYTHING EVERYWHERE ALL AT ONCE

Written and directed by Daniel Kwan and Daniel Scheinert, or collectively known as ‘Daniels’, EVERYTHING EVERYWHERE ALL AT ONCE seems to have garnered some serious attention both on social media and traditional reviewers. As of June 8th, 2022,  it boasts a whopping 95% on rotten tomatoes and brings together an electrifying cast that includes Michelle Yeoh, Jamie Lee Curtis, James Hong and Ke Huy Quan as some of the notable names.

If you have any sort of social media presence online or like to read up on new movies, you’ve probably seen tons of information and praise for A24’s EVERYTHING EVERYWHERE ALL AT ONCE. The story revolves around Michelle Yeoh’s character, Evelyn Wang, as she inevitably  falls into a larger than life plot involving the multiverse whilst trying to juggle and navigate the various relationships in her life.

Now, that was a gross oversimplification of the movie and the effect it had on its audiences. The movie itself had so many intricate layers to it that if I were to try to break it all down, you’d be sitting here for a week trying to read all of it. And truly, I think you can’t fully grasp the scope of this movie without seeing it first. 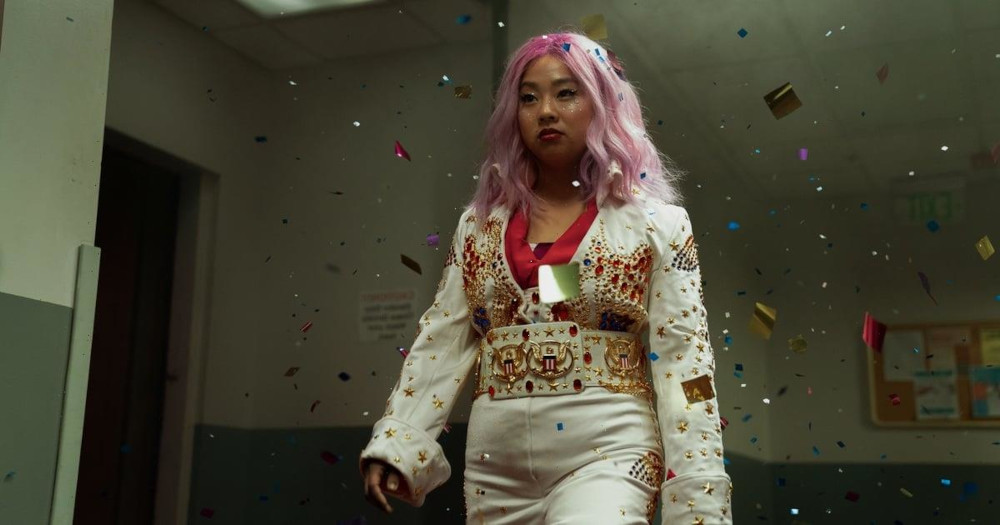 Before I even watched the movie, I had friends buzzing about it, telling me to watch it ASAP. And from other sources, I absorbed little tidbits of information. Michelle Yeoh was in it. Ke Huy Quan who was Short Round, from INDIANA JONES AND THE TEMPLE OF DOOM, was in it. Most of the core editing was done with a team of five people on Adobe Premiere. I didn’t know what to expect and I was later than most to seeing it, but I’m glad I did.

EVERYTHING EVERYWHERE ALL AT ONCE is weird. And it knows it’s weird and it owns being weird, wearing it like a badge of honour rather than a mark of shame. I don’t think many movies could have pulled off their main villain dressing up as Elvis or having a universe where everyone has hot dog hands much less having both in the same movie. But it’s a story of the multiverse and things get whacky in the multiverse. Surely, if there’s a universe where Spider-man’s name is Peter Porker and his secret identity is Spider-ham, there’s bound to be other strange universes. Let’s break it down into some sections so it’s more digestible.

At first, the characters are set up like pieces on a chess board, they all have a part to play and do it well. The disgruntled daughter, subservient husband and chastising father. But as the movie progresses, the relationship between these people and Evelyn start to mutate into something more than generic archetypes. 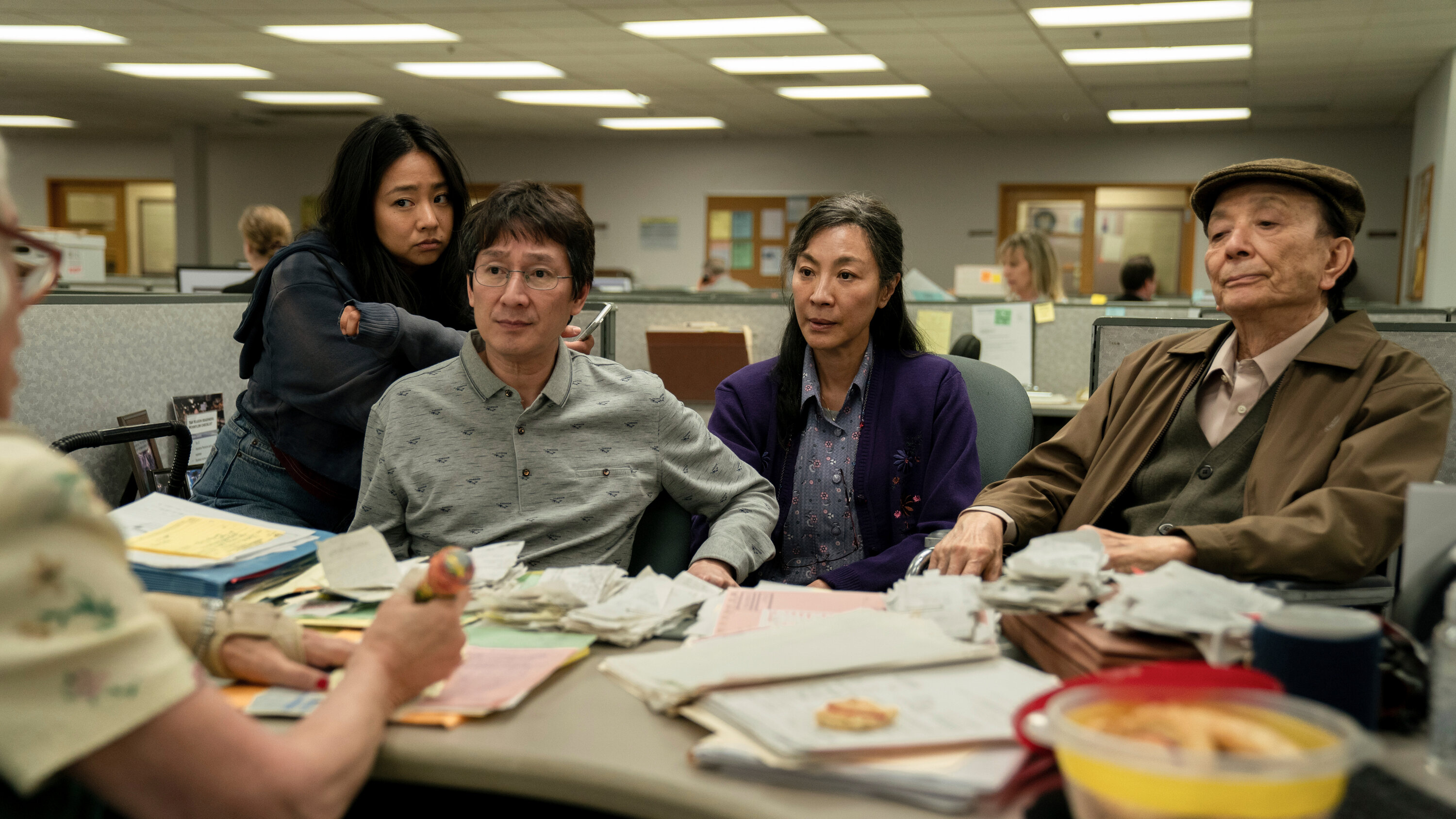 I remember walking  into the theatre with a bag of popcorn and high hopes. Imagine my surprise when the first scene of a movie about the multiverse was of a hectic, dysfunctional Chinese family. We catch Evelyn Wang at a very tumultuous time in her life. Her laundromat is being audited at the same time as her father, Gong Gong, had just arrived from China. Her husband, Wayman, tries his best to please his wife while trying to serve her divorce papers. Her daughter, Joy, is trying to get her mother to accept her white girlfriend Becca. Within the span of about 20 minutes, these relationships are exposed to the audience and despite the whacky premise of the movie and its rapid pacing, these relationships feel raw and real.

For me, Evelyn was an interesting choice as a main character. How many other Hollywood movies have you seen that focus on a Chinese immigrant mom as the protagonist? Especially because there’s been a long tradition in Hollywood where a lot of Asian representation has taken the form caricatures of side characters and sidekicks, never really the main characters.

I wasn’t expecting much in terms of visual effects and costuming, it’s always a plus but it never really makes or breaks a movie for me. My expectations were relatively low too because I heard the core VFX was five guys whose backgrounds weren’t even visual effects. Quite frankly, I was stunned at how fluid the VFX was and how gorgeous some of the outfits were in certain scenes. One scene that’ll stay with me was the introduction of Jobu Tupaki. In one shot, we only see her nails graze along the desks and office furniture. But as she walks, the nails rapidly change colour to signify how she’s channelling multiple universes at once. I thought that was a super clever way of hinting at the mystery and intrigue of the multiverse without explicitly explaining it. Later on, when we get to see the costuming and visual effects work in tandem to showcase Jobu Tupaki’s power in one of my favourite fight scenes. If you’ve seen the movie, you know what I’m talking about. If you haven’t, let’s just say it involves Elvis, golf and Lucha Libre. The cuts and visual effects between the different costumes were almost seamless and I was excited to see what tricks they could pull out next. Aside from those instances, it seems like the rest of the costuming was pretty standard and the visual effects were cheesy when it needed to be and mystical when it called for it.

I spoke to a few people about this and they were on opposite sides of the fence - one person said that they wanted more of the plot and story but others said they were literally crying in the theatre. I agree with certain aspects of both sides. The plot of an assuming hero saving the universe was a little generic for sure but the intricate ties between the characters propel the story to new heights for me. Because despite the glam and glitter of the film, this is a story about letting go, acceptance and love. And we all need a little bit of love sometimes. The pacing of EVERYTHING EVERYWHERE ALL AT ONCE is extremely upbeat and fast-paced but it fits the theme of the movie. Switching between universes requires a gentle hand in editing and pacing though because doing it wrong would be like throwing your audience on a visual roller coaster with no seat belts. Despite the ridiculousness of the multiverse, I felt very immersed and never felt like it was too much or too little. There were tons of quick cuts in certain scenes but it never took away from the movie. I think for movies like these, the director can’t hold your hand through it, it’s more of like letting you fall into the multiverse and making sure the places you land on have some cushion. For me, it definitely had enough cushion. The movie does seem like it’s something that you have to come back to see if you missed any small details. EVERYTHING EVERYWHERE ALL AT ONCE is everything I wanted in a multiverse movie. It wasn’t overly serious nor overly comedic. It was both an internal and external exploration of the universe and our place in it. The existentialist exploration was paired with a strong cast with superior performances and great editing. Everything about the film seems to work in unison to produce a multiversal masterpiece. This movie was definitely one of my favorites from the last couple of years and something I’d definitely recommend to other people.