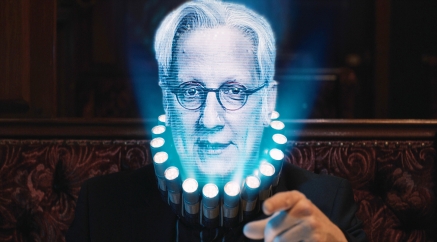 Forget what you thought was possible in a Canadian film. Written, directed and produced by Martin Villeneuve based on his own graphic novel, Mars et Avril is a visually stunning sci-fi fantasy set in a futuristic Montreal. With visual effects help from Carlos Monzon (Avatar, Transformers), Villeneuve has crafted a debut with the grandeur of a Hollywood blockbuster and the eloquence of the art house.

With the first manned mission to Mars as its backdrop, Mars et Avril follows three musical genuises: Jacob Obus (Jacques Languirard), an aging jazz musician and legendary lothario; Eugene Spaak (veteran film and theatre director Robert LePage), a late technological wizard who lives on in a cybernetic body; and Arthur (Paul Ahmarani), who builds instruments modelled after female bodies. Each of the three finds their lives altered by the appearance of the gorgeous young photographer, Avril. A poetic love story set in a sumptuously rendered future, Mars et Avril provides a science fiction world of a kind rarely seen on screen — it is subtle, beautiful and distinctly Quebecois.

After the screening, help us wrap up the festival in style with a party and feast at Double Zero Pizza, the premiere pizza, beer and wine hotspot in downtown Calgary. With good tunes and delicious food, it's the perfect place to mix and mingle with the city's coolest cinephiles, and to celebrate another year of incredible film at CIFF.

Tickets for the Closing Night Gala are $55.00 on sale now at calgaryfilm.com