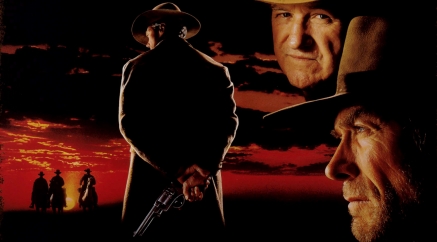 Year 1992
Runtime 131 mins
Language English
Cast & crew are scheduled to attend
Two decades after it won the Academy Award for Best Picture (along with Best Director, Best Editing and Best Supporting Actor), Unforgiven stands as one of the all-time great Westerns, a fitting end to a Hollywood tradition that stretches back to the very earliest days of cinema. Boasting career-high performances from Clint Eastwood, Morgan Freeman and Gene Hackman, the film's power and its place in cinema history are undeniable. That impact wouldn't have been possible without the Albertan locations and crews at the heart of the production. Now, on the film's 20th anniversary, CIFF is incredibly proud to celebrate Unforgiven's legacy by inviting the talented artists and artisans who were so essential to bringing Eastwood's vision to life. Join us for a screening of the film, followed by a Q&A session with the people who were on hand and on set for the making of this Alberta classic. Please follow us after the screening to the Palomino Smokehouse, 109 - 7 Ave SW, for a night of live music, barbecue and reminiscing.
After-party will feature live performances by Vancouver's Sumner Brothers, Kingston's Tom Savage Trio and locals The Goodtime Specials, it'll be a roots-rockin' celebration of one of the Alberta film industry's proudest moments.Tickets to Unforgiven - Revisited Gala are $25.00 Rated 14A