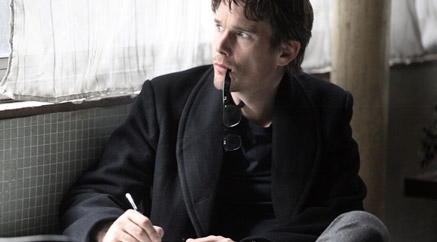 Woman in the Fifth, The

In his first film since 2004's much-acclaimed MY SUMMER OF LOVE, BAFTA Award-winning director Pawel Pawlikowski shifts gears from romantic drama to psychological thriller without losing any of the nuance on which he's built his reputation. Working with a cast of heavyweights that includes Ethan Hawke and Kristin Scott Thomas, Pawlikowski transforms Douglas Kennedy's novel into a tense cinematic mystery.

Hawke plays Tom Ricks, an American author who moves to Paris in a last-ditch effort to reunite with his estranged wife and daughter. Best-laid plans being what they are, Tom finds himself down and out in the Paris suburbs, living out of a hotel and struggling to make ends meet. Things look bleak until the appearance of Margit (Scott Thomas), a gorgeous widow who strikes up a sudden, passionate relationship with the struggling writer. The more time he spends with Margit, though, the more aware Tom becomes of a series of strange encounters and inexplicable events. Is the affair the inspiration he needs to get his life back on track, or is it a sign that some force is trying to take that life from him?

PRECEDED BY SHORT FILM: SOMETHING LEFT, SOMETHING TAKEN
DIRECTOR Max Porter & Ru Kuwahata, USA, 2010, 10 MIN
Too many true-crime stories and an overactive imagination can make any situation sinister – but just because you're paranoid doesn't mean you aren't right.

Who doesn’t like Elmo? SESAME STREET’s helium-voiced red monster is loved the world over, but most of us know next to nothing about...

As a pair of teenaged lovers, Enoch (Henry Hopper) and Annabel (Mia Wasikowska) are entirely unconventional.

This film has been rescheduled for Thursday September 29 @ 7pm.