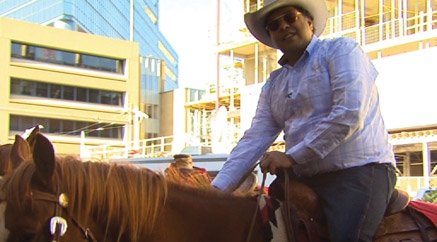 As Calgarians, we all know it, and in fall of 2010, Naheed Nenshi lived it – anything is possible in Calgary! A Muslim political newcomer with little name recognition in the city at large was elected mayor of one of Canada’s most vibrant cities, right in the heart of “redneck Alberta.” How’d it happen? The face of politics in Calgary was forever changed when an informed, self-made Harvard grad harnessed the power of social media to engage directly with citizens and tackle civic issues head-on to win over a city. Campaign insiders share behind-the-scene stories of his strategy and surprise victory. With full access, the film follows Naheed Nenshi as he changes the culture of City Hall, the face of Calgary, and the future of politics.

In celebration of Alberta Arts Days (September 30 - October 2, 2011), join social media experts and cultural ambassadors for a lively post-screening discussion on the role social media can play in promoting arts and culture in our dynamic and rapidly evolving city.

The social media panel will be moderated by Camilla di Giuseppe, social media guru and news anchor at CTV Calgary and below are a list of panel participants joining us for the discussion.Jim Button is a marketing strategist at Evans Hunt where he turns passive audiences into communities. He is also the past Vice-President of Corporate and Community Affairs at Big Rock Brewery and an avid arts fan.
Richard Einarson was the Communications Manager for the Nenshi Campaign. He is Vice-President, Client Services and Marketing for Chaordix, who are world renown crowd sourcing experts based here in Calgary.
DJ Kelly was a political commentator for Global Television, CBC Radio and Metro Calgary during the election who started on blogs and Twitter. He is also a marketer who has worked with Lunchbox Theatre, Theatre Junction, and several other local arts groups.
Daorcey LeBray is Mayor Naheed Nenshi's communications advisor. During the election he was an active Nenshi volunteer and member of the ArtsVote advocacy group.
Wendy Peters lives and breathes social media. She is the Calgary Community Manager for Yelp - who's mission is to help people find great local businesses, to the tune of about 53 million people per month.
Where: JOHN DUTTON THEATRE
Calgary Public Library
616 Macleod Trail SE

For those who believe that television, movies and the internet have led to a passive culture, the talented young filmmakers in the Youth...

The small town of Angels Crest reels with horror when a three year old boy is found frozen to death.