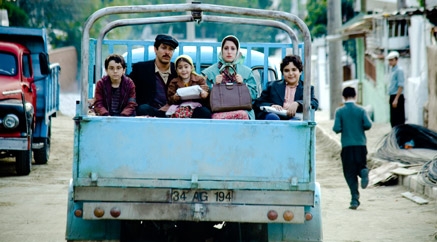 It’s not easy “assimilating” comedy into a depiction of Europe’s troubled relations with its migrant workers. But that’s exactly what ALMAYNA: WELCOME TO GERMANY does with the past and present of one Turkish-German family as they stumble through two countries to ask one question: “Who am I?”

Forty-five years ago, Huseyin (Vedat Erincin) came to Germany from Turkey as a Gastarbeiter (a guest worker). Now, as a full German citizen, he’s taking seven of his family members back to his home village and a life that his grandchildren can barely imagine. Meanwhile, Huseyin’s grandson, Cenk (Rafael Koussouris), tries to do exactly that: imagine the absurd hurdles that his grandfather had to clear on the way to his new home, like an immigration official who insists on the importance of pork consumption.

Its opening and closing credits may roll to archival footage of Germany’s guest worker program, but ALMAYANA is more feel-good comedy than social commentary. Still, in the 45 years and thousands of kilometres between Hamburg and Anatalya, Huseyin’s family finds plenty of life to experience.

Who doesn’t like Elmo? SESAME STREET’s helium-voiced red monster is loved the world over, but most of us know next to nothing about...

The films in the Alberta Spirit competition don’t just represent the best in Alberta storytelling.

As Calgarians, we all know it, and in fall of 2010, Naheed Nenshi lived it – anything is possible in Calgary! A Muslim...