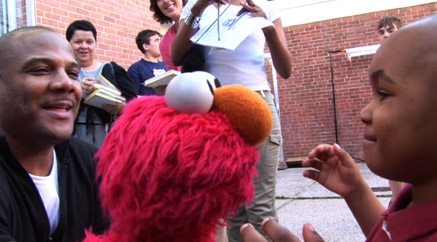 Who doesn’t like Elmo? SESAME STREET’s helium-voiced red monster is loved the world over, but most of us know next to nothing about the artist behind the puppet persona. BEING ELMO: A PUPPETEER’S JOURNEY aims to remedy that, chronicling the life of Elmo mastermind Kevin Clash. Fascinated by puppets from an early age, Clash started making his own muppets and characters and put up backyard shows for the neighborhood kids. His talent didn’t go unnoticed for long, and soon enough he began to perform for the local CBS affiliate.
As a teen, Clash adored THE MUPPET SHOW and dreamed of working with master puppeteer Jim Henson. He got in touch with Kermit Love, a designer for Henson, who got the ball rolling. Before long, Clash found a home on SESAME STREET in the mid-80’s and by coincidence was assigned the role of Elmo. He ended up reinventing the character, deciding that Elmo should stand for pure love.

Narrated by Whoopi Goldberg, this heartwarming documentary contains rare behind-the-scenes archival footage, offering a look at SESAME STREET that will delight viewers of all ages.

The small town of Angels Crest reels with horror when a three year old boy is found frozen to death.

As a pair of teenaged lovers, Enoch (Henry Hopper) and Annabel (Mia Wasikowska) are entirely unconventional.