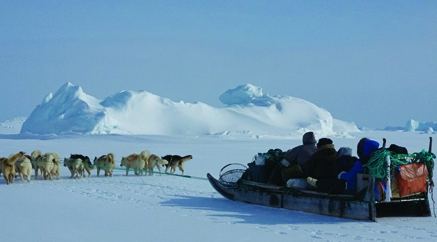 Year 2012
Runtime 82 mins
Language Inuktitut
Subtitles Northern dialects with English subtitles
na Premiere
Director Stephen A. Smith and Julia Szucs are scheduled to attend.For communities in the circumpolar north, a warming planet isn’t an academic point— it’s an elemental force changing the way they live. Vanishing Point, an NFB documentary directed by Stephen a. Smith and Julia Szucs, examines the reality of those changes by tracing the connection between two northern communities. Narrated in subtitled Inuktitut, Vanishing Point follows an Inuit elder named navarana as she retraces her ancestors’ voyage from Greenland’s uummannaq district to Baffin Island. But while the two communities are linked by blood, time has driven them apart— navarana’s people have maintained a highly traditional way of life while her distant relatives in Baffin Island have adapted contemporary technologies to a modern climate. Altered by thousands of years of culture, navarana must fit her traditions into a changing world.

My Father and The Man In Black

Early in My Father and the Man in Black, writer-director-producer Jonathan Holiff recalls...

Jason Becker: Not Dead Yet

Jason Becker could play the guitar in his sleep — literally.