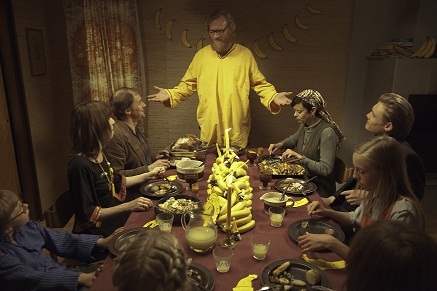 Nikolaj's family is anything but ordinary. Newly arrived in the planned community of Rykkin — a town his father helped design — they're the type to celebrate Christmas by quoting Nietzsche and staging a playful protest against the patriarchy. Rebellion is in his blood.

When Nikolaj's mother is killed in a traffic accident and his father descends into a seemingly endless depression, Nikolaj seeks his own way to lash out at the world's unfairness. Armed with safety pins, hair dye and the Sex Pistols' newly minted Never Mind the Bollocks, Nikolaj embraces Johnny Rotten's rallying cry of “No future” as the only way through.

A punk-rock coming-of-age story, Sons of Norway is thoughtful and raucous all at once. As Nikolaj's father starts to take inspiration from his son's new-found nihilism, the question becomes, how do you rebel when your dad is right there beside you?

Winner of the Guadalajara Film Festival audience award, The Misfits explores what can happen when people pretend to be who they’re not, and...

Twenty-three-year-old Shiv lives a comfortable life at home in India as he attends school. Surrounded by family, friends and a beautiful girlfriend, Shiv...

Barbara has been chosen as the official German entry for the Academy Award's Best Foreign-language film category.