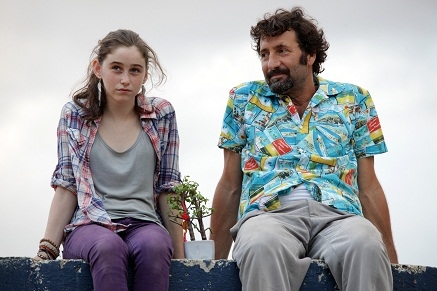 Year 2011
Runtime 86 mins
Language Hebrew, English
Subtitles Hebrew language with English subtitles
Canadian Premiere
Winner of the Best Actor Award and nominated for 6 other Israeli Academy Awards including Best Film, Director and Screenplay, Off White Lies begins when Libi, a 13-year-old Israeli girl played by newcomer Elya Inbar, visits Northern Israel with her long-estranged father. When a Lebanese air strike forces the two into in an underground shelter, Libi learns that her father is currently “in-between apartments”. As the area starts to be evacuated, he senses an opportunity to reinvent the pair as refugees in hopes of being given new lives in Jerusalem. As her father works towards creating a new life, Libi is forced to go along with his lies while at the same time coming to grips with her own burgeoning identity.

Every relationship has its obstacles, but some are more difficult than others. a budding affair between a german street punk and a refugee living...

For his first film since his mafia epic Gomorrah picked up the Grand Prix at Cannes in 2008, director Matteo Garrone has set...