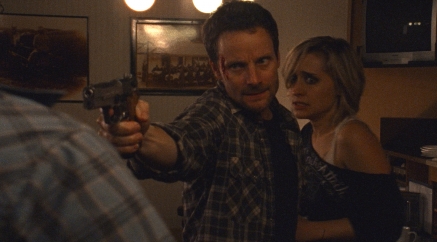 Year 2011
Runtime 95 mins
Language English
Alberta Premiere
A DISCOVERY AWARD NOMINEE
Director Christopher Petry is scheduled to attend.
Written and Directed by CIFF Youth award-winner Christopher Petry, and based on a story by Paddy Mitchell, one of Canada's most infamous bank robbers, Marilyn is a throwback to the gritty crime dramas of the '70s. Career bank robber Michael grant (Ryan Robbins) is on the run when he makes a quick stop to pick up some supplies, only to find that he’s picking up more than he counted on at first. The beautiful young Marilyn (Allison Mack) seems to be a damsel in distress, but turns out to be a force in her own right—maybe even more than Michael can handle. The pair's uneasy relationship gets more and more tangled as they begin to uncover the details of each other’s lives. As Marilyn's show-biz aspirations and Michael's criminal lifestyle come to a head, their destinies will end up forever changed.

Director Kruno Malnar and the Cast & Crew are scheduled to attend.