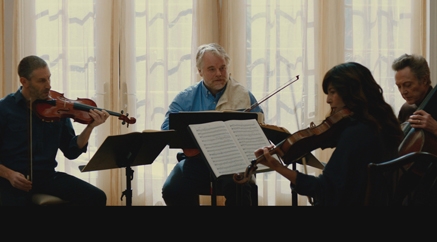 With a powerhouse cast led by Philip Seymour Hoffman, Christopher Walken, Catherine Keener and Mark Ivanir, A Late Quartet pulls back the curtain on the rarefied world of classical musicians. As the acclaimed Fugue Quartet prepares for its 25th season, cellist Peter (Walken) is diagnosed with Parkinson’s. Stepping back from the quartet to come to terms with his new reality, Peter's absence upsets the delicate balance between the other three.

While the group navigates Peter's absence, long-simmering tensions quickly come to a crescendo. Infighting and infidelity threaten to destroy the marriage of violist Juliette (Keener) and second violinist Robert (Hoffman), and first violinist Daniel's (Ivanir) budding romance with Robert and Juliette's daughter only adds to the discord. Amidst this tangle of lust, jealousy and insecurity, the group's season launch rapidly approaches—if they can stay together that long.

Winner of the award of the Youth at this year's Cannes film festival and a nominee for the Palme D'Or, Holy Motors is...