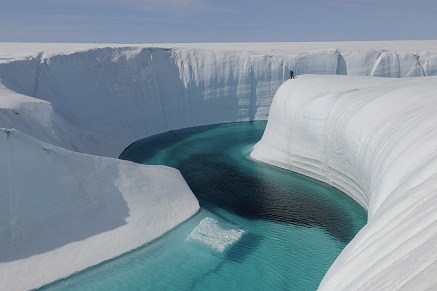 Chasing Ice, winner of the Sundance Excellence in Cinematography Award for Documentary Films, follows National Geographic photographer James Balog as he documents climate change in the world’s most extreme environments. Through stunning visuals and rare live footage, Balog captures the beauty and vulnerability of the planet’s receding glaciers, creating a compelling portrait of global warming.

Using Balog’s work as a focal point, Chasing Ice examines humankind’s relationship with our changing environment. Combining art and science, Balog works to change the dialogue around climate change, confronting public perception with indisputable evidence. “A powerful pace of history is unfolding in these pictures,” warns Balog. Documenting his personal and professional challenges on the Extreme Ice Survey, Chasing Ice explores a polarizing issue through the lens of nature’s most shocking evidence.

The event doesn't stop with the screening, though. Your gala ticket also gets you into our elegant, environmentally conscious Green Carpet afterparty at the River Cafe on Prince's Island Park. Enjoy seasonal Canadian cuisine from Calgary's most consistently acclaimed restaurant, in one of the city's most beautiful settings.

RECEPTION TO FOLLOW AT RIVER CAFE (included in ticket price)

Antiviral, the debut feature from Brandon Cronenberg, is a murder mystery for a generation that has...