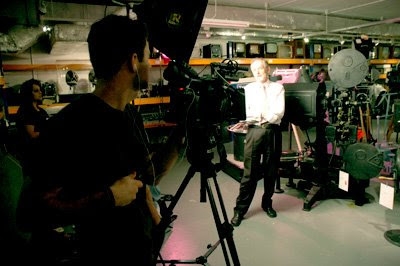 IF YOU WISH TO ATTEND THE ENCORE SCREENINGS OF THE ALBERTA SPIRIT SHORT FILM PROGRAMS AT EAU CLAIRE, PLEASE VISIT THE INDIVIDUAL PROGRAM LINKS.

Each year, CIFF has the privilege of shining a spotlight on the talented makers of short films working in our province. In 2012 the amount of world-calibre work produced in Alberta was nothing short of intimidating. Choosing the best 90 minutes of short filmmaking seemed like an impossible task—no matter how we divided it up, the program would be leaving out something essential. It just couldn't be done.

So, we didn't do it. Instead, for the first time, we've expanded the Alberta Spirit competition into two full 90-minute programs, each showcasing the diversity of talent within the province. Our filmmakers have embraced a variety of techniques, including our first 3D entrant, and the breadth of the stories on display is further proof that there's no simple answer to the question of what is an Alberta story. From haunted fables to gritty period pieces and a full-out musical, there's no limit to what Alberta's filmmakers are capable of.

Your ticket will get you into both screenings, with a 30-minute intermission.

After-party will follow at The Libertine, 223-8th Avenue SW, with complimentary drinks and light appetizers. Must present your ticket to get in.

While awaiting his prognosis, Richard (Grant Linneberg) is finding it harder to focus on his life. Overwhelmed by fear of what's to come, his actions become increasingly desperate.

THE MAN THAT GOT AWAY

Winner of the DAAD Short Film Prize at this year's Berlinale, Trevor Anderson's film is an eccentric musical tribute to his great uncle Jimmy, the black sheep of the family.

Screening out of competition

For true cinephiles, the movie theatre is almost a religious experience. In this joyful documentary, Edmonton director Mark G. Power travels to some of the world's most unique movie houses, including the Guinness-certified World's Smallest theatre and one of Bollywood's movie temples in a tribute to the magic of the cinematic experience.

Set in the lawless lands of the Alberta frontier, a violent task has long-lasting repercussions in this grisly Western gothic.

BLOW ME A KISS

In a dance set to music by Calgary's the Lovebullies, three onlookers in a cabaret are transported back to a significant time in their lives.

The words we use can have many meanings, as proven in this clever combination of love story and crime drama.

A team of 19 animators from the Quickdraw animation Society brings colourful life to the final, unfinished film by the late Chris J. Melnychuk.

In the days of prohibition, a young girl grows curious about her father's late-night journeys. Stowing away in his truck, she finds herself thrust into a dangerous situation.

Sophie's husband, Tom, has been working a suspicious amount of overtime lately. Worrying about infidelity, Sophie finds a way to make sure they'll stick together.

A beautifully naturalistic conversation between two lovers, Good Morning explores anxieties about romance, careers and ageing with an eye for authenticity.

Calgary theatrical institution Joyce Doolittle stars in this heartwarming story of an unlikely friendship in a hospital waiting room.

Arthur's late-night practice session proves to be less solitary than he thought with the appearance of the lovely Mittens in this short set in 1950s Toronto.

A “twisted tale for demented children,” this fully 3D stop-motion short shows that it's never a good idea to steal from the dead.

Both short packages and the after-party are included in your ticket price.

Antiviral, the debut feature from Brandon Cronenberg, is a murder mystery for a generation that has...