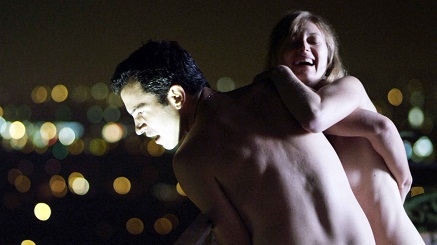 28 Hotel Rooms is a hyper spare drama that distills the familiar romance story into its most basic, potent beats. Set in the titular 28 different hotel rooms, the film follows an unnamed novelist (Chris Messina) and data analyst (Marin Ireland) whose series of hotel room encounters eventually become a deeply complicated, and unconventionally committed, relationship. Both are already dating other people, but their ongoing affair gradually takes on all the ups and downs of a devoted marriage—gentle teasing, fights and intense late-night conversations.

Driven by a pair of intimate, powerful performances and directed with quiet confidence by writer Matt Ross, 28 Hotel Rooms carefully constructs its familiar love story using details that are as minimal as a hotel room’s furnishings.

How Do You Write A Joe Schermann Song

How do you choose between the love of your life and your muse? That is the choice faced by Joe Schermann, who plays...

Today hasn't been a good day for Dolph (Jack Plotnick).

An award-winner at the Durban, Deauville and Nashville International Film Festivals, The Dynamiter is the tale of three brothers leading quiet lives of...