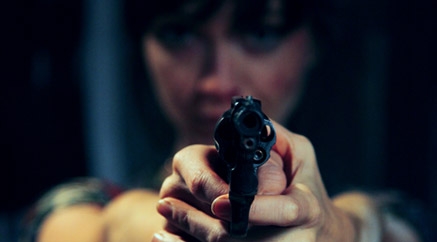 Jay Lee’s outrageous follow-up to the international cult-sensation ZOMBIE STRIPPERS is a surreal, taboo-busting trip down the rabbit hole of blacker-than-pitch black comedy. Alyce, an introverted young woman, tries to console her friend, Carroll, after Carroll discovers her boyfriend has been cheating. The girls get drunk and take ecstasy before heading up to the roof of Alyce's apartment building. Intoxicated and giddy, the girls start playing around but a drunken stumble knocks Carroll off the ledge of the six-story building.

Haunted by guilt, Alyce finds herself in a nightmarish wonderland of sex and drugs and murder! But she soon discovers that her problems are nothing that can’t be solved with a blender, a microwave, a hack saw, a baseball bat and a garbage disposal.

The team who brought you VERSUS has returned with another hard-edged battle royale featuring tough gangsters, deadly women and cybernetic penis implants.

FRONTIER(S) director Xavier Gens will once again shock and disturb with his latest film, an intense and extremely graphic post-apocalyptic thriller.