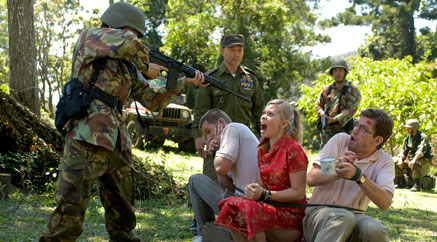 Danish and English with English subtitles

Director Tomas Villum Jensen (who has acted in countless acclaimed Danish films and directed a handful of his own) and master screenwriter Anders Thomas Jensen (THE GREEN BUTCHERS, ADAM’S APPLES) are no strangers to collaboration. Re-teaming for the third time, they have created another black comedy filled with deadpan humor and unlikely scenarios in AT WORLD’S END, an absurdist comic adventure in the vein of ROMANCING THE STONE.

Criminal psychologist Adrian (Nikolaj Lie Kaas, ADAM’S APPLES) is sent to Indonesia to examine the mental state of Severin Gertsen, a Dane who claims to be 129 years old thanks to the miraculous properties of a rare carnivorous plant. Severin has been sentenced to death for murdering an entire camera crew whom he caught stealing “his” plant. When an absurd misunderstanding places Adrian in the same prison, the two of them escape, and together with Adrian’s secretary Beate they embark on a frantic chase through the jungle in pursuit of the precious plant. With outstanding performances and incredible cinematography, AT WORLD’S END is a cinematic adventure you won’t want to miss.

The Famous and the Dead

Portuguese and German with English subtitles