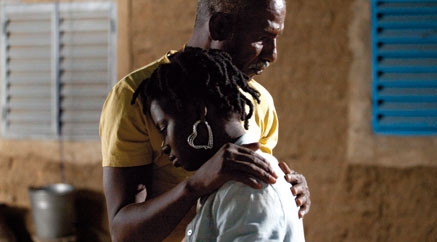 French and Arabic with English subtitles

PG: Not Recommended for Young Children

At a luxury hotel in N’Djamena, the capital city of Chad, Adam and his son Abdel both work at the swimming pool as caretakers and swim teachers to the elite tenants. Adam is a former swimming champion and small legend in his community. When that lustre fades and his privilege loses weight with the new Chinese owners of the hotel, our aging hero is forced to adjust as Abdel usurps his position and an embarrassing work downgrade strips away his pride. While this humiliation poisons the family’s relations, the civil war still pounding at the city’s borders adds to the tension. Torn by betrayal and the moral weight of Adam’s choices, this simple family is pulled into the tragedy of political unrest through its own internal instability.

The film’s title is taken from the famed pan-African poet Aimé Césaire: “Beware of assuming the sterile attitude of a spectator, for life is not a spectacle, a sea of miseries is not a proscenium, a screaming man is not a dancing bear.” A SCREAMING MAN beautifully illustrates this truth by treating the personal and political spheres of one man’s life as invariably, and heartbreakingly, connected.

A Woman, A Gun, and A Noodle Shop

Kosmos is a thief who works miracles.

The Famous and the Dead

Portuguese and German with English subtitles

After being in competition two years in a row with his now...