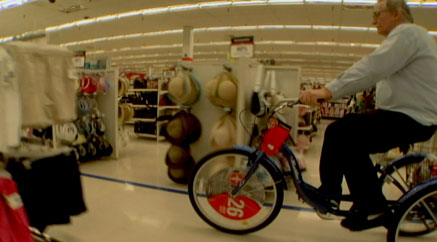 In a city like Calgary—which has the highest national average of cars per household, along with having North America’s longest urban pathway and bikeway network—award-winning director Monteith McCollum’s film could help inspire a revolution. A DIFFERENT PATH follows an eclectic group of activists rebelling against the alarming (and familiar) trend of replacing communities with commutes, and replacing sidewalks with strip mall parking lots. The film follows senior citizens in Seattle who are left to walk on the shoulders of busy freeways, a man in Portugal who found inspiration in a story about a New Yorker who avoided rush hour by paddling his kayak across the Hudson River and a trumpet-playing cyclist in Toronto who helps organize marches where pedestrians and cyclists use large numbers of participants to “take back” the streets.

McCollum gathers stories of people who reject the current trend of favouring car culture over “greener” forms of transportation—like walking and cycling—which once dominated the streets of the world.

In the Northern Argentine area known as “The Impenetrable,” the children of a deeply impoverished village await the annual visit...