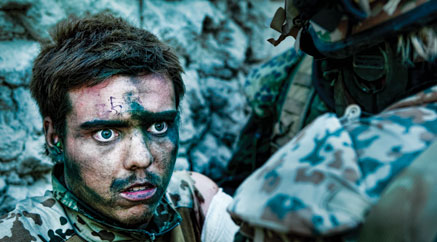 Danish and Pashto with English subtitles

Awarded the prestigious Critics’ Week Grand Prix at Cannes this year, ARMADILLO is a raw, unflinching look at the “War on Terror” through the visors of two young Danish soldiers stationed at Camp Armadillo in Helmand, Afghanistan. Janus Metz’s raw and unsentimental film captures the mortal peril soldiers confront each day—the adrenaline highs and increasingly cynical lows—that lay bare the reality behind the mythological story of man and war. In a country where enemy and friend are indistinguishable and the threat of death hangs so heavily just outside the walls of their base, how do you keep soldiers from feeling disillusioned about their mission to help train and rebuild Afghanistan?