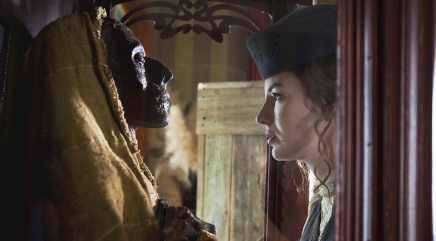 Adapted from the adventure comic books of the same name created by French artist Jacques Tardi in the 1970s, THE EXTRAORDINARY ADVENTURES OF ADÈLE BLANC-SEC is a wild and anachronistic flight of fancy – a fantasy-inflected science fiction tale that heaps dinosaurs and walking mummies into turn-of-the-century France, all realized with decadent visual flair.
After a telepathic experiment causes a pterosaur egg to hatch its murderous occupant, endangering all of Paris, journalist Adèle Blanc-Sec (Louise Bourgoin) finds herself embroiled in the case while trying to revive her comatose sister using the ancient knowledge of Egypt. Quelle surprise. Where else, after all, can one turn to remedy an injury from a freak tennis accident?
Adèle Blanc-Sec is calm, cool, droll and fashionable, and even predates Indiana Jones and other tomb raiders by more than a decade. Brought to the screen by writer-director Luc Besson (THE FIFTH ELEMENT, LA FEMME NIKITA), THE EXTRAORDINARY ADVENTURES OF ADÈLE BLANC-SEC is a film as extravagant and bombastic as its title: adventure made even sharper with magic and style.

When debt-collector Francois goes to raid the apartment of an Algerian family in the Parisian suburbs, it’s just another day at the office.

In a tense postscript to the Wild West, director Meteo Gil imagines a world where Butch Cassidy has burned slowly rather than going...

When Genial Sigve (Henrik Rafaelsen) and his wife Elisabeth (Maibritt Saerens) arrive in a backwater Norwegian town, they find a pair of fast...