Now that the festival has been over for a few days, we're ready to shake the snow off and look forward to the future - like the 20th Calgary International Film Festival next year (Sept 18-29, 2019!) or our ongoing Doc Soup series that kicks off with THE PRICE OF EVERYTHING on November 7. Before we delve too deep into those, though, we wanted to revisit some of our favourite highlights of the last few weeks!

For another year, we brought 1500+ people along for the adventure as we kicked off the 2018 festivities with the Opening Gala at the Jack Singer Concert Hall. Featuring live music, the first VIP attendees, local industry folks, and an excellent film selection in THE SISTERS BROTHERS, it was a great way to get prepped for what the next 12 days would bring. 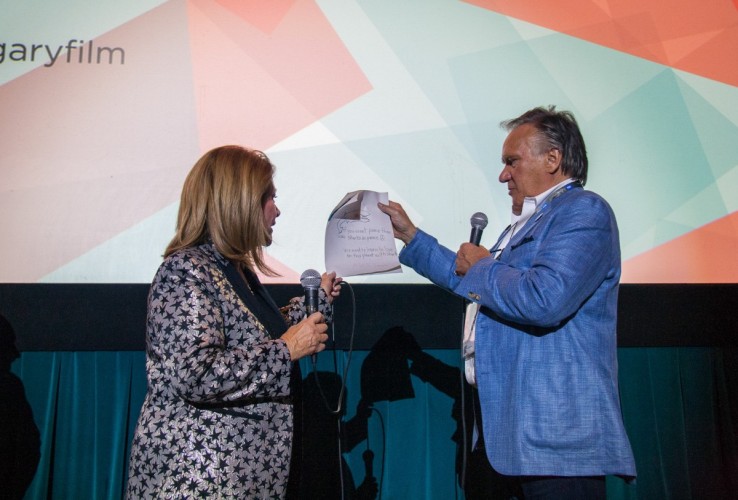 As Thursday and Friday rolled in, we opened up Globe Cinema and Eau Claire, eventually covering all 8 screens at both venues. Directors, writers, producers, cinematographers, and many other people from roles within the industry came to check out the festival - some from down the street and some from the other side of the world. Films like the crowd-pleasing Finnish comedy HEAVY TRIP and the simultaneously awe-inspiring and introspective ANTHROPOCENE: THE HUMAN EPOCH were among the first to show at those theatres, and many filmmakers got to experience the energy of an enthusiastic audience firsthand. The parents of SHARKWATER: EXTINCTION director Rob Stewart, pictured above, were in town representing the documentary on behalf of their son, who tragically passed away during filming - and saw how well his work had been received when a young fan handed them a homemade note about his own love of sharks. 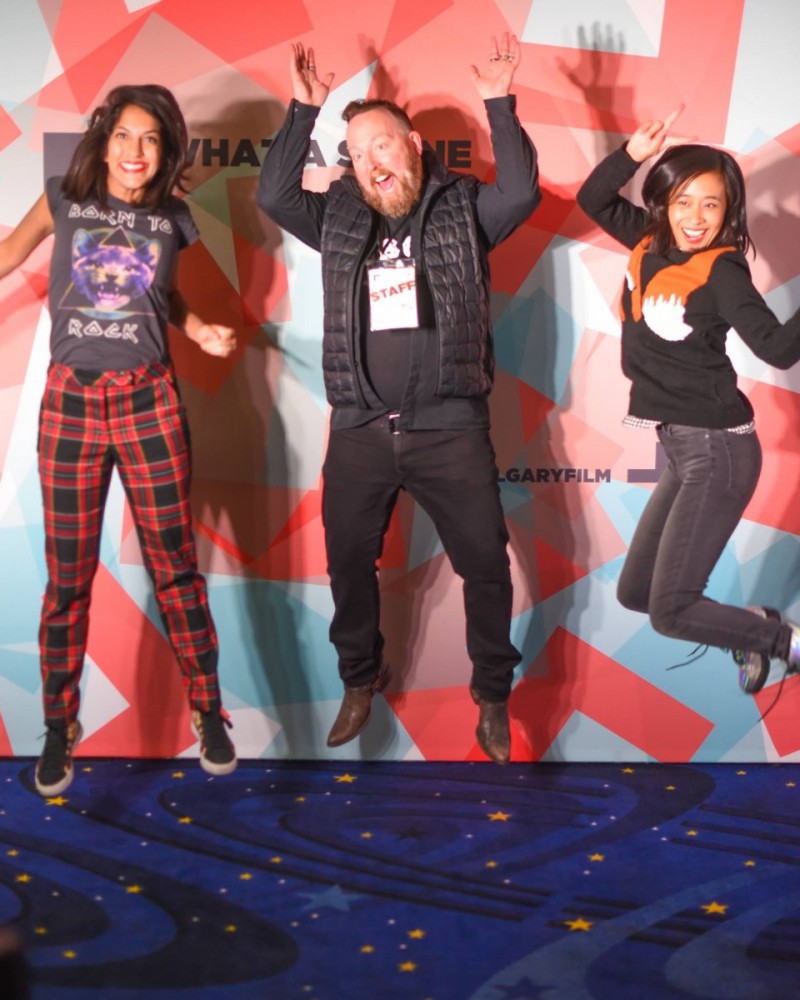 Breaking into the weekend, even more filmmakers got to the city, and people free from the weekday work schedule turned up in droves to catch a movie or two before heading back into real life. One of the most talked-about films of the festival was UNLOVABLE, and director Suzi Yoonessi and writer/star Charlene DeGuzman swung by Eau Claire to do an intro and a Q&A - but not before grabbing one of the programmers, Guy Lavallee, to do a classic red carpet pose. 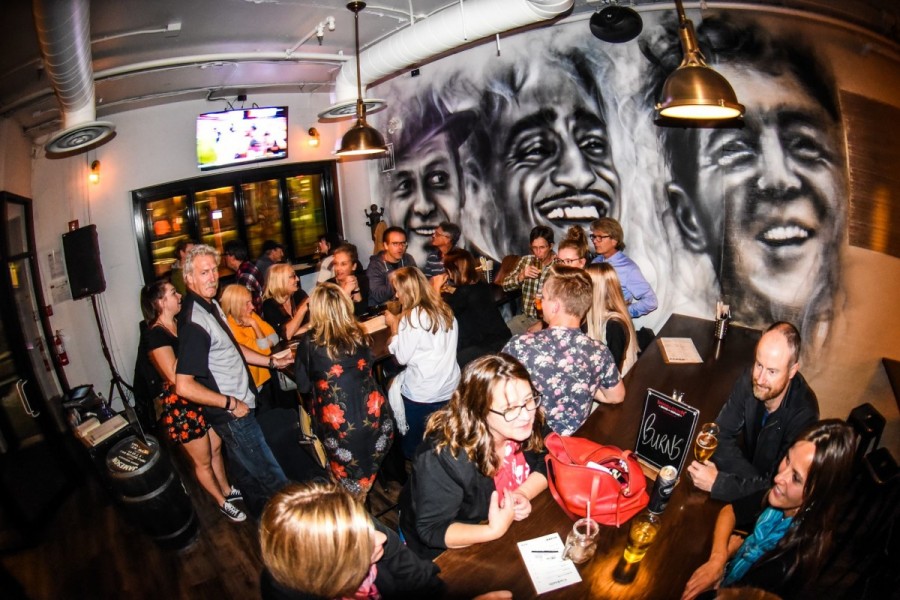 One of our main themes that we try to consistently highlight is the utmost quality of the productions that are made in and around Calgary. As such, we always have plenty of local filmmakers visiting during the festival, and even more that submit their work for the big screen. One of the local selections this year was MAN RUNNING, from veteran YYC director Gary Burns, which features some familiar landscapes and areas of the city. After their screening, the visiting cast and crew popped over to Paper St. to celebrate. 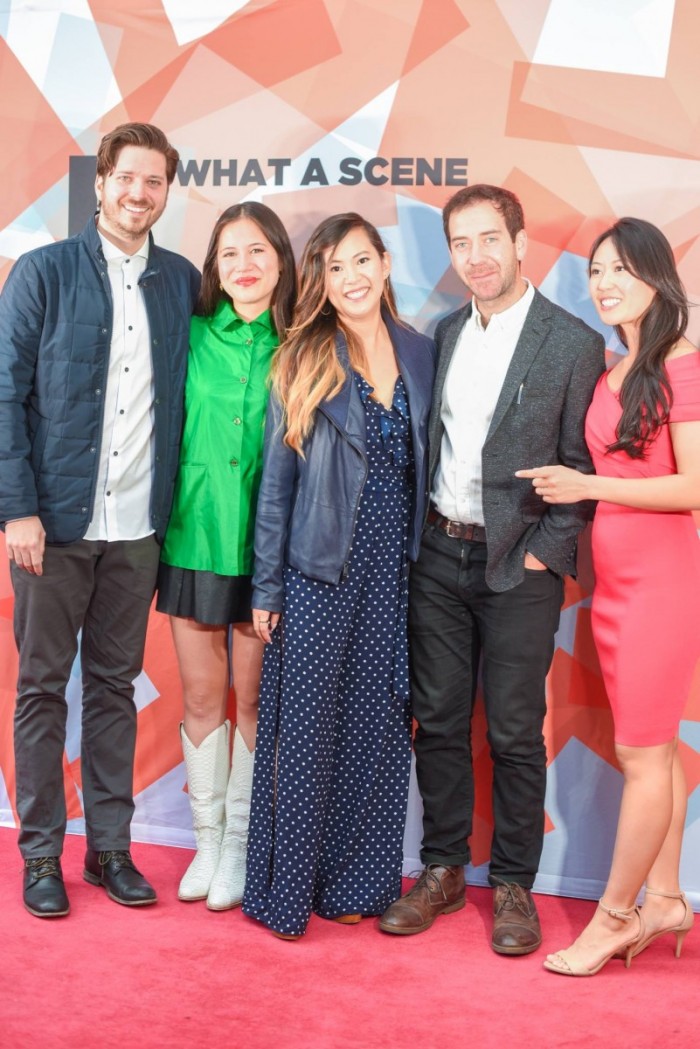 Another local work, CIRCLE OF STEEL by Gillian McKercher, drew huge crowds to a sold-out screening, as many of the crew and extras were pulled from the Calgary area. A thoroughly Albertan production, we are always proud to showcase our local talent, and one of the hardest jobs we have is trying to decide which of the many incredible local submissions to choose! 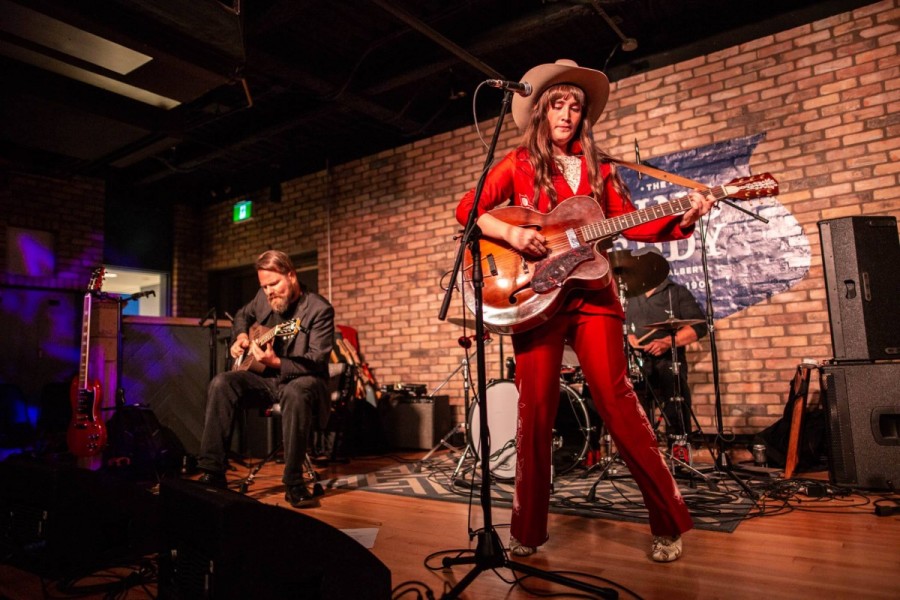 Speaking of local talent, we continued our SHOWCASE ALBERTA series this year with an updated twist: ALBERTA MUSIC SEEN, a collection of some of the best collaborations between Alberta's musicians and filmmakers over the last few years. Kicking off our few days of presence at the National Music Centre at Studio Bell, it was another smashing success this year, with several music performances, an enthralled crowd, and a jumpin' after-party across the street at King Eddy where musicians like Amy Nelson (above) entertained fans until late into the night. 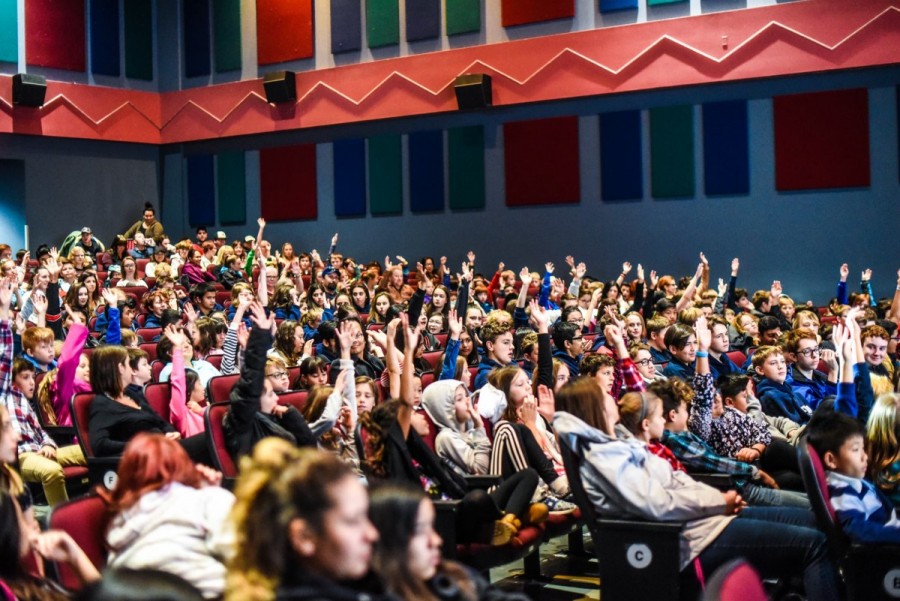 We introduced a new series this year, too: the explosively popular GENERATION NEXT, a group of films aimed for young adults, meant to inspire conversation and lead to deeper discussion of relevant social issues. We even partnered up with some local schools to bus in hundreds of kids, allowing us to reach a whole new set of nascent film fans. Documentaries like RESPETO and social commentaries such as THE MISEDUCATION OF CAMERON POST really got the chatter going, before the theatres had even fully emptied! 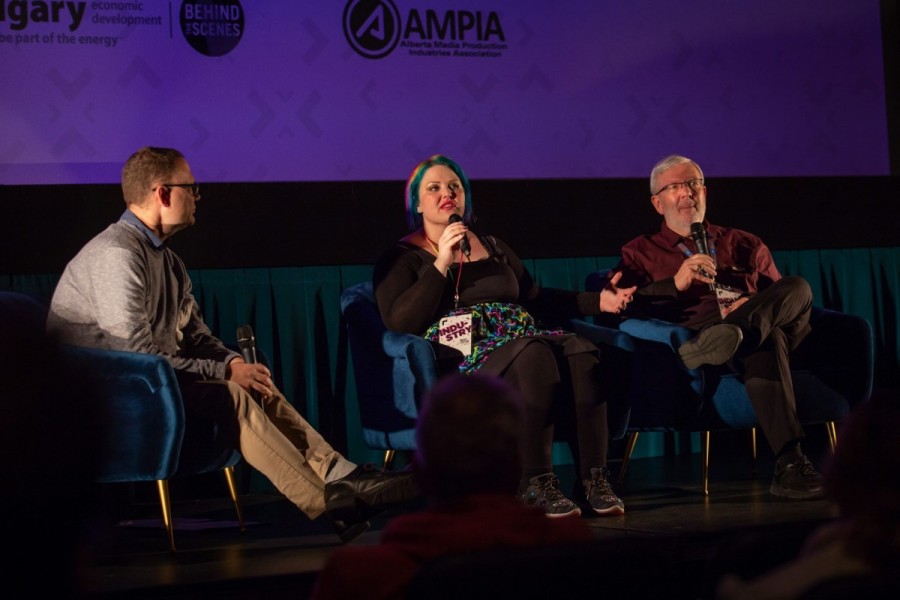 We also had a few very notable guests this year - film critics Leonard and Jessie Maltin, who joined us to talk about the changing face of the film review industry in the age of the internet, and how they are adapting to the new paradigm. This was just one of our Behind the Screen events, which in 2018 discussed topics like how to get your child into acting, what role a cinematographer plays, the challenges faced by First Nations filmmakers and actors, and more. We also once again did a tour of Bleeding Art FX Studio, one of our more popular events! 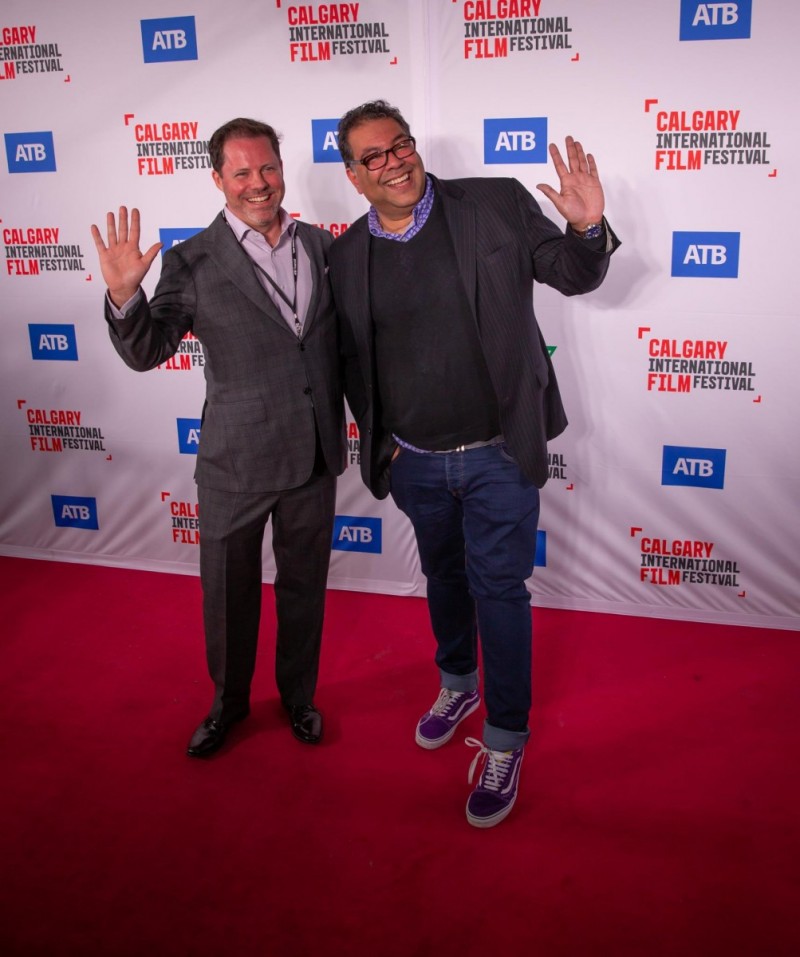 Calgary mayor Naheed Nenshi stopped into the Closing Gala this year too, posing for some photos before the show started. Focusing on the former goalie, Alberta's own Grant Fuhr, the gala film MAKING COCO: THE GRANT FUHR STORY drew plenty of provincial and local fans to Eau Claire Cinemas for a glimpse of Fuhr or some of the other hockey world VIPs that accompanied director Don Metz to the premiere. 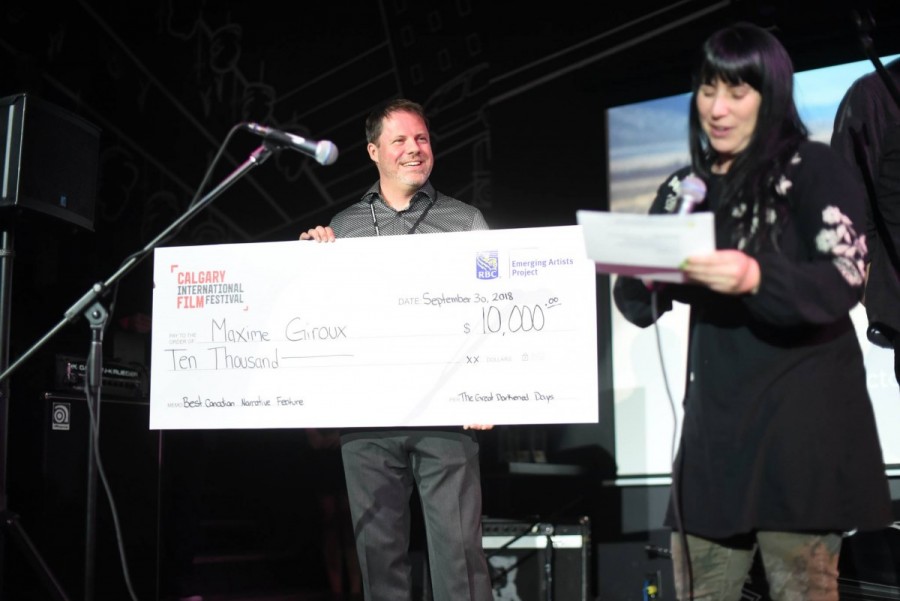 On the last night of the fest, we were proud to announce our juried award winners, including Best Overall Short winner FAUVE by Jeremy Comte and the $10,000 Best Canadian Feature prize, presented by the RBC Emerging Artists Project, for THE GREAT DARKENED DAYS by Maxime Giroux. Our 2018 Fan of the Year Cliff Lawley, who saw 37 films in 11 days, also got his award, and we took our final bows until late into the night as the snow started to fall outside.

THANK YOU to all of the fans, filmmakers, friends, and family members who came out to see a movie, to meet an inspiring person, to learn more about the art and the industry, or to get involved with the festival. We wish we had the space to list all of you by name!

If you still can't get enough of Calgary Film, be sure to check out our first documentary of the Doc Soup series,THE PRICE OF EVERYTHING. Doc Soup is a monthly event, taking place on the first Wednesday of each month, that brings some of the world's trending documentaries to Calgary screens - find more information here. Pick up a pass or get a single ticket at the door before the screening.

We can't wait to see what next year brings for Calgary Film - we'll see you at the 20th Calgary International Film Festival in 2019!